Curran Biotech has developed a breathable and environmentally friendly coating that can be applied to filters to stop the spread of Covid-19. Founder Dr Shay Curran explains more to Jessica Owen.

Over the last year, there has been a huge effort to develop solutions that can stop the spread of Covid-19, most of which has concentrated on manufacturing face masks. But while this PPE is an effective tool for preventing users from inhaling the virus, it would be much better if the local air could be cleansed of the risk to begin with.

With that in mind, the Houston-based materials science company Curran Biotech has developed Capture Coating: a breathable hydrophobic nanocoating that can be applied to air filters to attract the virus and deactivate it. 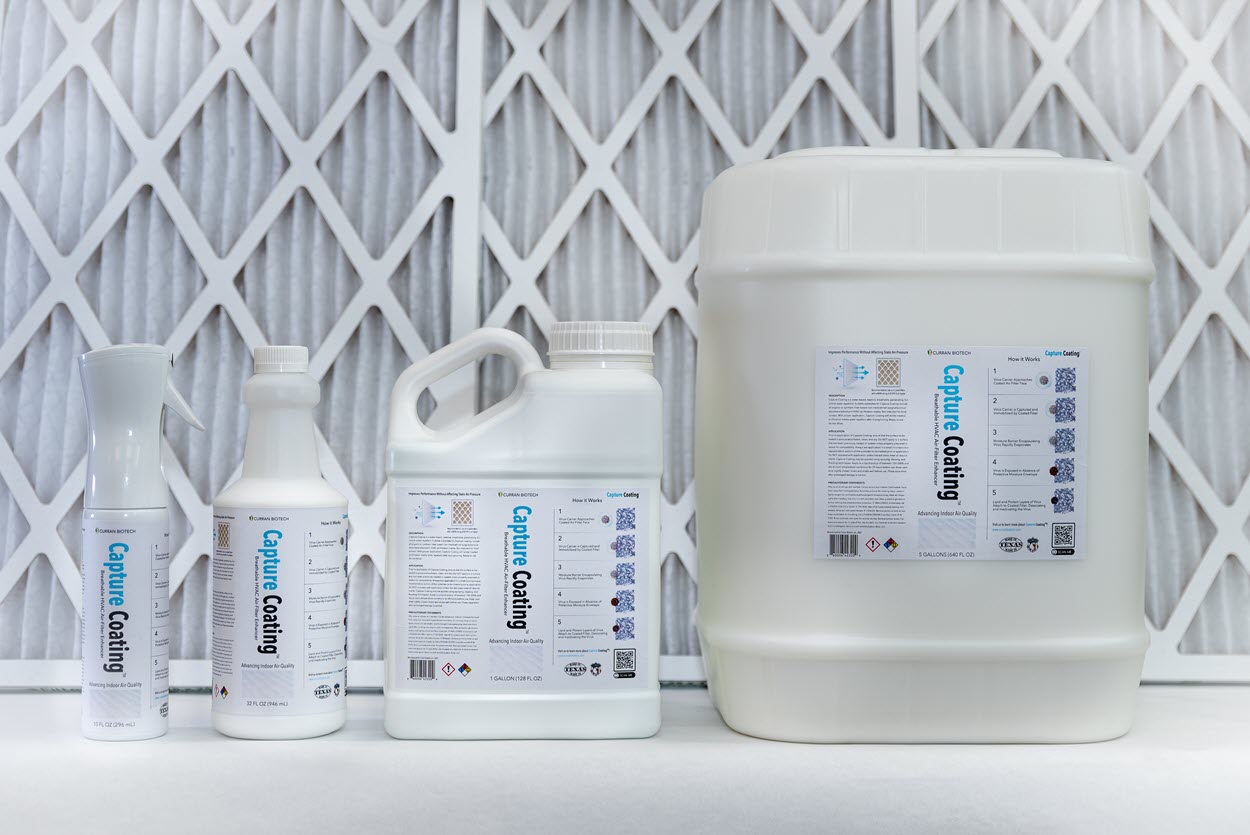 “The vaccine rollout is great, but I wanted to think of a solution that could minimise the effect of living with the virus while it’s still around,” says Dr Shay Curran, founder of Curran Biotech.

“We began by looking at face masks, but then I wanted to take that one step further by concentrating on the air around us. Removing the virus from the air is vitally important because it spreads so much – small droplets from a cough can travel around 30 feet and others can stay in the air for hours.”

To understand how to tackle the virus in the air, one needs to first understand its nature. In the case of Covid-19, the virus travels in a water medium – a bubble comprising water and phlegm. These droplets can pass through untreated filters, but by adding Curran Biotech’s hydrophobic coating, the filters can capture the droplet and begin to destroy it.

“Our coating enhances the filter’s ability to stop the virus from passing through because it rejects water,” he explains. “This slows down the speed of the virus, causes it to drift, and then be attracted to the nearest charged surface, which happened to be our coating.

“The virus will then sit on the coating and the moisture will dry out, and so eventually the virus will desiccate.” 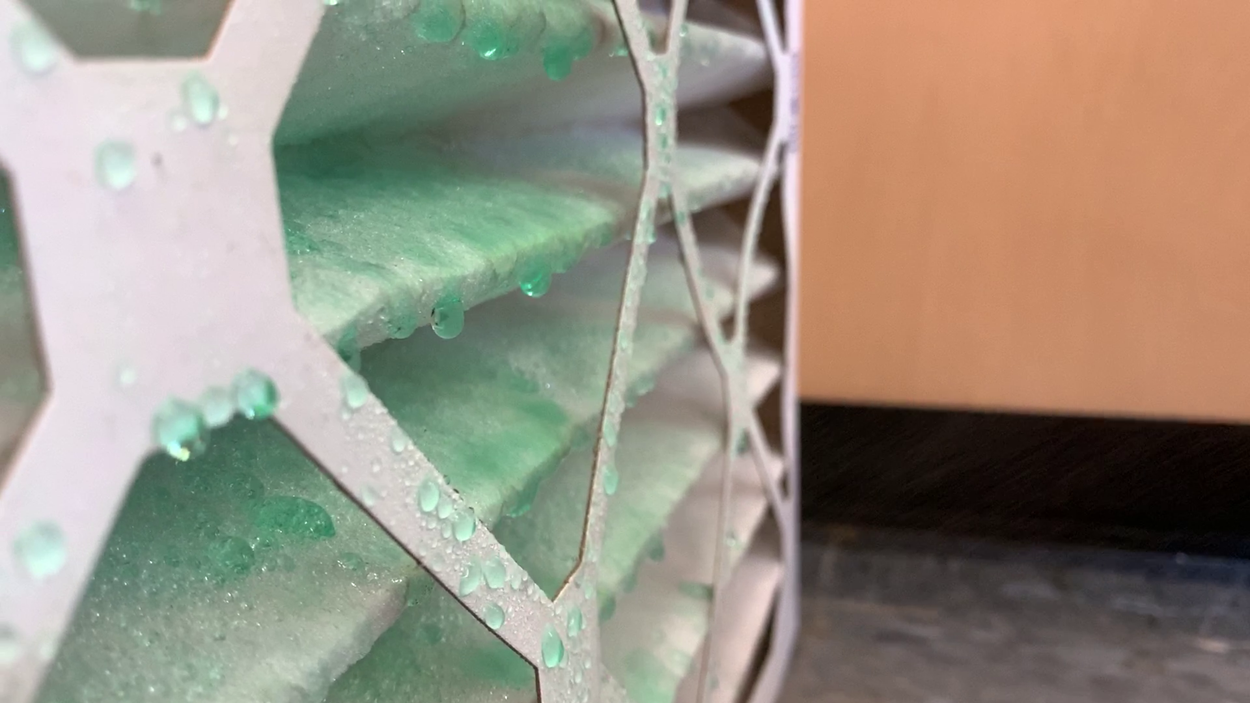 It costs around US$3.50 to treat a filter that is 25 inches by 16 inches and one inch thick

While Curran Biotech’s coating is impressive, using hydrophobic chemistry to treat the air is ‘nothing new’. What is new is that it is breathable, which means it does not block air as it passes through the filter. Instead, the coating wraps around the fibres of the filter, allowing air to pass through with ease.

“This is something that’s unheard of and we are unique in being able to do this,” says Curran.

Another benefit of the company’s technology is its environmentally friendly ingredients. Based on silicone chemistry (similar to the material in a contact lens) as opposed to carbon chemistry, Capture Coating contains no harmful fluorocarbons or toxins.

“I didn’t want to add another chemical into the ecosystem that could cause more damage,” he explains. “If you look at the number of detergents and chemicals currently being used to clean surfaces, we’ve just done a chemical dump around the planet this year. And I didn’t want to add to those consequences.”

Not only is the chemistry more sustainable, but the coating helps buildings to be more energy efficient. To mitigate the virus being in the air, what buildings have been doing is bringing in more fresh air from the outside. However, this air usually has to be cooled or warmed depending on the outside temperature to meet indoor requirements, which is quite an energy-intensive process. Curran Biotech’s coating allows for indoor air to be recycled and cleansed at the same time.

What’s more, the coating only needs to be applied once and it will last the lifetime of the filter, and that one coating is affordable in price. For example, to treat a filter that is 25 inches by 16 inches and one inch thick, it costs around US$3.50: “So, give up your morning coffee and you have a filter that prevents the spread of the virus,” says Curran. The coating can also be applied to any filter – old or new – which means that no potentially expensive equipment needs to be installed.

Curran Biotech's coating is both hydrophobic and breathable

Curran Biotech is currently taking a B2B approach, mainly dealing with municipalities, although it does work with distributors who liaise with schools and residential buildings. So far, Capture Coating is now used in 11 states across the US and the University of Houston has just adopted the technology and plans to coat 33,000-36,000 filters on campus.

Capture Coating has only been available since December 2020, but the team had actually figured out the science of the coating within a week around mid-March. From there, it took around two months until the team was satisfied with the formula and to figure out how to manufacture it from a small beaker to 1,000 gallons per day – which it now does. It was the testing, regulations and validation that took the time, says Curran. Although, the company did have a head start thanks to Curran’s expertise in this field.

He says: “I have been researching the field of hydrophobic coatings for 11-12 years as I’m a physics professor and have a research team at the University of Houston. Years ago, we created a fluorocarbon-free hydrophobic coating that can be applied to masonry and wood, which we developed into a growing business.

“So, it was a bit like developing the vaccine – we already had the knowledge, we just needed to tweak it to a different application.”

The nice thing about Capture Coating is that it can even deal with mutations of Covid-19 and other viruses as well, including influenza. In fact, right now the team is looking into the coating’s effect on rhino viruses (viruses that cause common colds), Legionnaire’s disease, and other forms of bacteria.

“We are now looking into other ways in which we can help, and it is likely that we can stop other viruses from the tests that we have conducted internally,” he says.

“We also know that a version of our technology can be applied to MRSA (a type of bacteria that’s resistant to several widely used antibiotics) as well. Basically, we could coat fabrics, linens and curtains in hospitals to stop the spread of that.”

For now, though, the focus is on distributing Capture Coating to help save lives during the Covid-19 pandemic. That said, Curran notes that the company’s technology is only ‘part of the solution, not the only solution’. It’s the combination of coatings, face masks and washing hands that will keep the virus at bay.

To find out more about Curran Biotech, visit www.curranbiotech.com