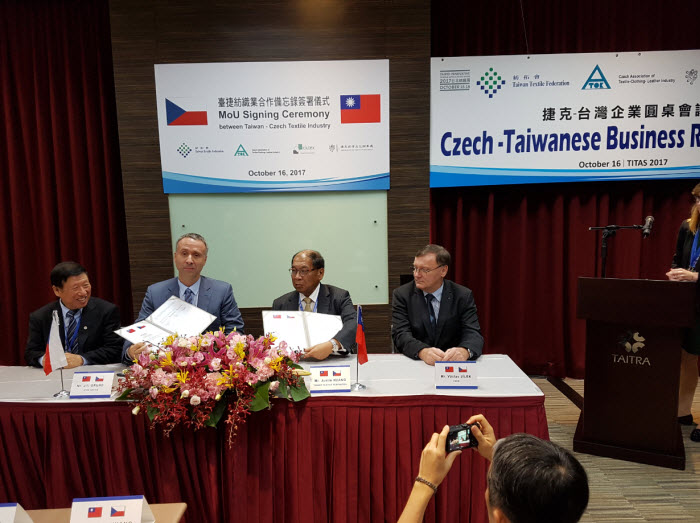 Held over three days, this year’s exhibition began with a Czech-Taiwanese business roundtable to strengthen collaboration. The roundtable was set up through the efforts of TITAS organisers Taiwan Textile Federation (TTF), Czech Economic and Cultural Office Taipei (CECO), and Czech Cluster of Technical Textiles (CLUTEX).

This is the Czech Republic’s first ever participation in TITAS, which it also marked by signing an Addendum Agreement to the Memorandum of Understanding (MoU), effective in 2015. Nearly 40 companies attended the business roundtable, and many showed a strong interest in start-up business relationships, says TTF.

According to TTF, in the past, the value of Czech textile and clothing imports was higher than exports due to the significant imports of clothing, which were then re-exported to other European countries, resulting in a negative trade balance. However, the gap between exports and imports continues to decline.

With Vaclav Jilek, CEO of CECO, and Alex Lo, executive supervisor of TTF and chairman of Taiwan Technical Textile Association, as witnesses, Justin Huang, president of TTF, along with Justin Grund, president of ATOK, and CLUTEX, signed the agreement to build the co-operation platform for the industries of both sides to promote trade and investment, business co-operation, IP protection, information sharing and professional talent.

During the business roundtable, Martin Vandas, CEO of BTTO, shared his experience about cooperating with Taiwanese companies and his hopes for BTTO to become the second-largest glass fibre supplier in Europe.

A total of six Czech textile and clothing companies will exhibit in a joint stand at TITAS 2017, showcasing home textiles, fashion accessories and textiles, and technical textiles specialities.

Register for FREE now - it takes less than a minute